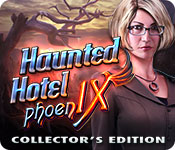 Uncover the truth behind the legendary fire that destroyed a university.Who started the fire?Wildfires are breaking out all over Northern Oregon, with witnesses claiming that the fires were caused by the legendary Oregon Phoenix. Is a mythical creature truly to blame, or is it just a cover for a clever arsonist? Travel to the scenic mountains of the Pacific Northwest and dig through the ruins of a burned university to gather clues about the fire that started them all. Will you uncover the truth, or will you become the Phoenix's final victim?